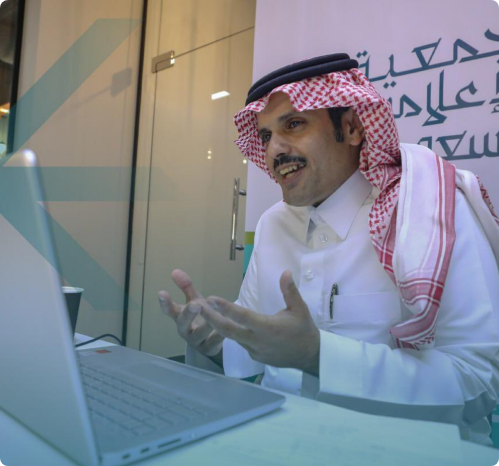 The ambitious vision of the Kingdom of Saudi Arabia included a basic path for volunteer work through civil society institutions in accordance with mechanisms, systems and laws that achieve the lofty goals of activating and developing the third sector. In response to this, the Saudi Media Association was established – at the initiative of a group of men and women who took upon themselves the positive contribution in providing volunteer work. It mainly serves media employees of both sexes and presents initiatives and projects that have a sustainable impact on the media and media professionals. The association obtained the license from the Ministry of Human Resources and Social Development No. 1863

The statement, which was issued in the second half of the year 2020, coincided with the conditions of the Corona pandemic, and the actual start of the association was in the last quarter of the same year and early 2021, when the association began its activity with a number of important strategic agreements that began with the agreement with Al-Sharafiya Group and Impact Media Production to work together in many of Projects and initiatives Then the agreement was with Prince Ahmed bin Salman Academy for Applied Media to implement training programs and courses. The third agreement came with the Council of Civil Societies in the Riyadh region to establish a unified media center for the non-profit sector in the Riyadh region, and a work team was formed for this purpose. The association also concluded an agreement with the Autism Families Association to work together in highlighting the association’s role in serving this precious group of society, and in the same context An agreement was reached with the Charitable Foundation for Orphans Care (Ekhaa)

All Rights Reserved To © Association of Saudi media